Our beer costs less than gasoline...drink here and don't drive!

Monday nights from 7-10 PM with $5 buy in and house matches the pot!  Also, come play dart anytime, as we are adding new dart boards!

Join us Tuesday nights at 7 PM for a $5 buy in with prizes and drink specials.

Come see your favorite NFL teams play here.  The Creek will again feature the NFL Sunday Ticket.  We will have drink specials and weekly giveaways!

The Creek will have all Iowa, Big 10, CU and Pac 12 football games this fall.

View our Nebraska page with the 2010 schedule, and be sure to join us for the 300th sellout game right here at the Sand Creek Lounge on September 26, 2009!

NASCAR at the Sand Creek Lounge...

Here's some recent history of NASCAR and racing sports; you'll find the 2010 NASCAR schedules by category and more information about current rankings on the official NASCAR Web site.  Be sure to come into the Sand Creek Lounge for all of the events...we'll have all of the races televised throughout the bar on race day..

In 2003, NASCAR made two major announcements to help the dawn of the new era become even clearer. NASCAR announced in June that Nextel would become the new series sponsor in 2004, replacing R.J. Reynolds' Winston brand after 33 years. Three months later, in September, Brian Z. France was named NASCAR's CEO and Chairman of the Board replacing his father, Bill France Jr. 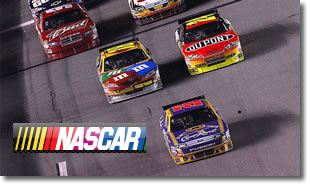 Insurance would replace Anheuser Busch as main sponsor of NASCAR's No. 2 series. And, there was the phasing-in of NASCAR's safety-oriented new car.

But no matter the year, there have always been -- and always will be -- constants: Close, safe competition, fair stewardship and drivers who are genuine American heroes.