Our beer costs less than gasoline...drink here and don't drive!

Monday nights from 7-10 PM with $5 buy in and house matches the pot!  Also, come play dart anytime, as we are adding new dart boards!

Join us Tuesday nights at 7 PM for a $5 buy in with prizes and drink specials.

Come see your favorite NFL teams play here.  The Creek will again feature the NFL Sunday Ticket.  We will have drink specials and weekly giveaways!

The Creek will have all Iowa, Big 10, CU and Pac 12 football games this fall.

View our Nebraska page with the 2010 schedule, and be sure to join us for the 300th sellout game right here at the Sand Creek Lounge on September 26, 2009! 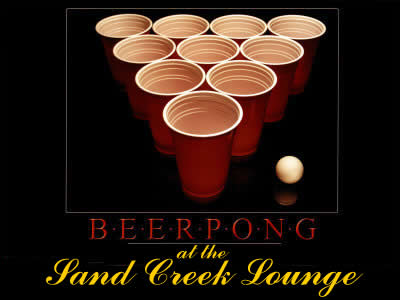 Whatever you do, don't get wet!
(on the outside, anyway)

Join us on Tuesday nights at 7:30!  Get your team together to play some exciting rounds of Aurora's favorite sport!  It's five dollars per person to play, with discount pitchers all night long! 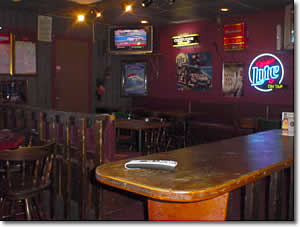 a table tennis ball across a table with the intent of landing the ball in one of several cups of beer on the other end. The game typically consists of two two-player teams, one on each side of a table, and a number of cups set up on each side.There are no official rules, so rules may vary widely, though usually there are six or ten plastic cups arranged in a triangle on each side. The number of players on a team can vary as well, from one to three or more.

When a ball lands in a cup, the defending team must consume all of the beer inside that cup. The game is won by eliminating all the other team's cups before all of one's own cups are eliminated. The losing team must then consume all the beer remaining in the winning team's cups. The order of play varies – both players on one team shoot followed by both players on the other team, or players on opposite teams can alternate back and forth.

The REAL origin according to national beer pong stat's and ranking web site "Beer Pong One" (coming soon) is that beer pong comes from a very old show called "The Bozo the Clown show". Those of you not old enough to remember this show or never saw the show would have seen at the end of the show, a child would stand in front of a line of buckets, and would throw a ball in to each bucket. The more buckets the child would make the more prizes he/she would win. The game was called the "Grand Prize Game," and the final bucket held a $100 prize. Some time after this in the 1980's someone, some where in Pennsylvania (State which topped the charts with party colleges in the 80's) turned this innocent game from the Bozo the Clown show in to a drinking game. Using the same concept, but instead of a line of cups, it turned in to a triangle, and instead of a prize, the defending team would have to remove the cup made and drink it.

In current times, the game is not always played with beer in the cups. Many bar's, Bing Bong Tables and www.beerpongone.com have carried the torch to the new generation but have been making efforts to make it a sport. In this effort for safety and health reasons have replaced the beer in the cups with water. The water is not to be drank, but is there to hold down the cups, and as the teams make balls in the cups, the cups are simply removed from the table. This allows the game to be played by ages 18 and up, where beer pong can only be played by only those people 21 years of age or older.

The game is a spin-off of a similar game, also called pong, which uses ping pong paddles and was said to have been created at Dartmouth College.

The most common modern version of the game is played without paddles and has a murkier beginning. The Daily Princetonian, the student newspaper of Princeton University, attributed the naming of the paddle-less game where balls are thrown into cups to the early 1980s at Bucknell University or Lehigh University.   Some students at Lafayette College, rivals of Lehigh, insist modern, paddle-less beer pong was invented at their school, but The Lafayette, the college's student newspaper, says there is no proof to back up the assertion.

The meaning of the terms Beer pong and Beirut may vary depending on where the game is played. Beer pong is the more common name of the game, with a CollegeHumor survey showing that 77% of respondents called it "Beer pong," versus 23% for "Beirut".

The naming of "Beirut" is disputed. The Daily Princetonian suggests that the name was coined at Bucknell or Lehigh around the time of the Lebanese Civil War, Beirut being the capital of Lebanon and scene of much fighting.

This diagram illustrates a standard set up for a game of beer pong, with either 6 or 10 cups being used.

Beer pong is usually played with two teams of two persons each, though it can be played with 2 teams of 1 person each. Each team begins the game standing at either end of the table behind their rack of cups.

According to the World Series of Beer Pong, the regulation table size is 8 × 2 feet (2.44 × 0.61 meters), and it stands 27.5 inches (69.8 centimeters) above the ground. Although the game is typically played on either a ping pong table or a folding banquet table, beer pong enthusiasts may create a personalized table for use by friends and visitors. In general, this will be a plywood board cut to proper size, sometimes painted with sports, school, or fraternity symbols and given a liquid-proof coating.

The most common cups used are Solo or Dixie 16 ounce cups. These cups have ridge-lines which can be used precisely to measure the amount of beer to be poured. On each side of the table, teams assemble equilateral triangles, with the convergence point focusing on the other team. Games typically use either six, ten, or fifteen cups.

Usually an inexpensive pale lager or light beer of 3.2-5% abv (for example, Bud Light, Natural Light, Keystone Light, Coors Light), or Busch Light is used since large quantities may be consumed during the course of several games. The game may be played without beer, as is done at Utah State University, a dry campus, where root beer is used instead.

Often times a variation of this game is played the day after a long night of drinking and is called "water pong". The set up is exactly the same, but the alcohol is replaced with water. This game encourages re-hydration and reduces symptoms of a hangover. Many times a "money cup" is added to the mix filled with something like juice or especially Gatorade to add flavor and electrolytes to the hydrating process.

Teams have many possibilities for reracks.

There are very few universal or "official" beer pong rules, though the organizers of the World Series of Beer Pong have attempted to codify them for their event. Typically, players abide by a uniform set of "house rules", which are often consistent within one university or region of the country (e.g., "Ivy League rules" or "West Coast rules"), or may vary on a house-by-house basis. Number of cups, bouncing, amount of alcohol, the distance shots must be taken from, etcetera, all may vary.

In some house rules, players must immediately drink any cup that has been hit. Failure to do so incurs a penalty, such as drinking more beer or losing the game.

Some rule sets allow for re-racking, which is also known as rearranging or consolidation. This is when teams rearrange their remaining cups into different formations after some have been hit. The formations, number of cups, and so on depend on the rule set. For example, a team with three remaining cups may ask the other team to "re-rack" their multiple targets into a single triangle formation.

After shooting, teams may dunk the ping pong balls into cups of water in order to wash the balls off. However, research showed that the wash cups still hold bacteria, such as E. coli.

Some other house rules include swatting the ball away if it bounces and if the ball spins around the cup, male players may finger the ball out and females may blow the ball out.

The typical path for the different kinds of shots.

There are three key ways to shoot in beer pong: the arc, the fastball, and the bounce. The most common throwing technique is the "arc", where one grasps the ping pong ball with the tips of the thumb and forefinger, holds the arm at an angle with the ball upwards, then throw by using gentle elbow motion, holding the upper arm parallel with the table.

Some players throw "fastball" style, which uses more of a hard chopping motion to send the ball in a more direct line to the intended target cup. Also, a fastball shot may be favorable if house rules dictate a cup that is knocked over is taken off the table, in which case a fastball can eliminate multiple cups if thrown hard enough.

A "bounce" is performed by bouncing the ball toward the cups. Since (depending on house rules) the other team may have the opportunity to swat away a bounced ball, a bounce may be worth more than one cup.

A shutout rule is a house rule usually stated before a game or during the game in the midst of a shutout. If the shutout does occur the losing team must do whatever the two teams decided on, such as going streaking or drinking a large quantity of beer.